Production based on the famous adventure novel by Jack London - White Fang - a story of a wolf-dog.

The far north is a hostile place during the rough times of the gold rush, where White Fang, a cross-breed of dog and wolf puppy, is growing. Characterised by wildness and effervescence, White Fang cannot easily fit in with a pack of wolves or even among people; he is neither accepted, nor does he accept easily. As he grows up, he encounters violence and hatred as well as kindness and even love. What will eventually be imprinted in his soul?

“In the role of White Fang, Milan Hajn gives an absolutely exceptional and complex performance, which combines stage work with modern recording techniques (the use of live cinema) as well as very personal acting in a first-person narrative. His concentrated acting vividly depicts the gradual domestication of a wild animal, without it seeming inappropriate or even embarrassing to the audience. Hajn is absolutely dominant and unmistakeable in this production. Such a role is quite unique in the sphere of puppet/alternative theatre based on interplay and that makes his performance all the more valuable.”

2019 Thálie Awards, commentary of the expert committee on the nominations

“They move across the stage as Indians, gold diggers, a pack of wolves, a dog sled team. And, from the big picture to the big details they shoot animal and human lairs, cages, fierce dogfights and hunts, escapes, maws, muzzles, lightning in their eyes, the landscape around the river in a sea of snow… The effect is perfect. The camera’s magic aspires to the realm of poetry.”

“Because director Jakub Vašíček works with that most of all, with images, with atmosphere – and he works with it wonderfully, sensitively and carefully. Above all, the intensity and authenticity of the situations make the production of White Fang a powerful experience for audiences young and old.”

“An abbreviated version of the world-famous novel. The production abounds with amusing moments, such as loot splitting among pack members, dog fights in wooden rink, etc. Yet, the production also features “chilling” scenes, so typical of the book. The production combines theatre and created live film, which is also projected live. This concept suitably fits the nature of performance and enables the spectator to understand the story from the perspective of the main animal character. Entertaining, yet respecting the value of the original book, the production is suitable also for younger audiences. All male cast present a captivating show with their playing and performing. The strong story is rendered originally, enabling the audiences to experience being in the wolf’s skin.”

„White Fang is an adorable performance. I think it contains the most clever use of camera on stage I have ever seen. Not only that. The whole concept is precise, well thought over, actors are great. The protagonist of main character is unbelievable.“

ERIK Award for the “Best Puppet Performance of the Season” 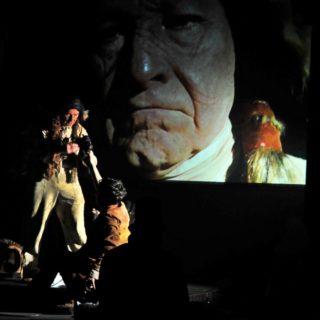 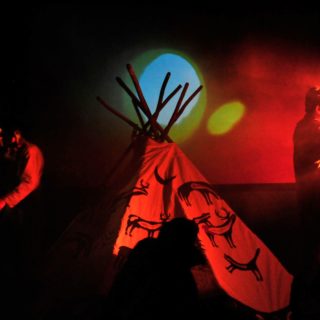 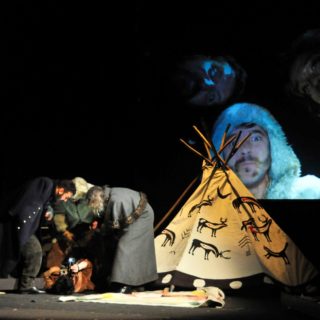 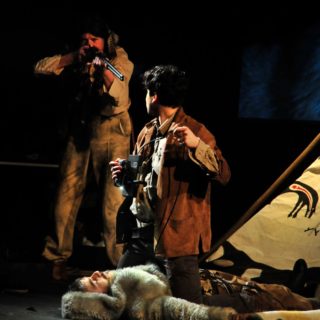 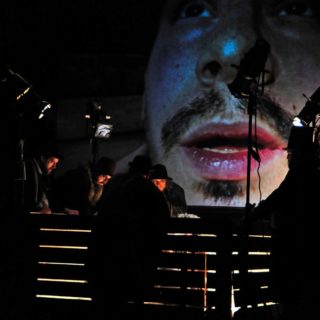 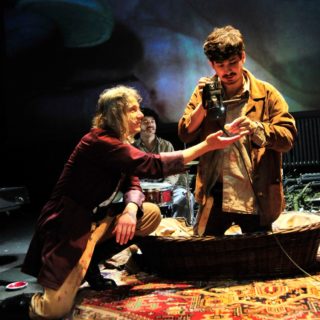 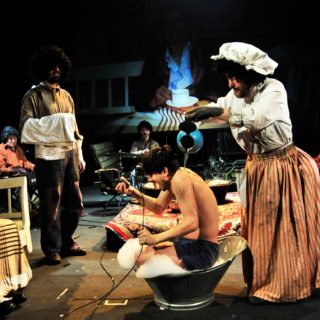 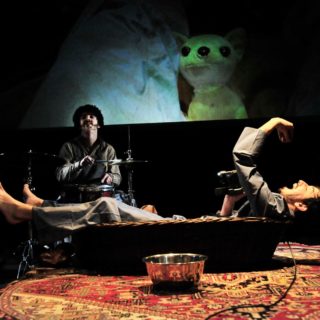 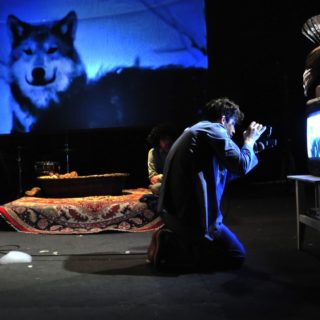