Drak Theatre’s Labyrint is a unique modern building. It is tailor-made for the efforts to combine art and education, which the theatre currently considers to be one of its most important goals. It offers boundless opportunities to learn the secrets not only of the theatrical arts, but also of ourselves and the world around us.

In addition to the permanent exhibit and interactive laboratory, you can also find an extensive offer of creative educational programmes, short-term exhibits and workshops held under the auspices of the International Institute of Figurative Theatre, the facilities of children’s and youth’s theatre troupes and much, much more. 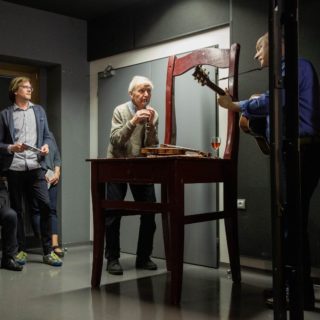 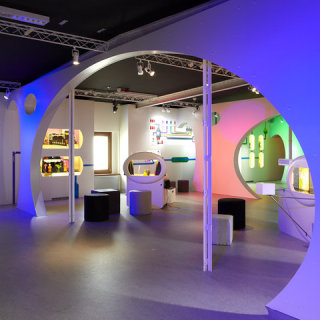 Labyrint originated in 2010 in one of the buildings of the former Theresian barracks, which was directly connected to the original theatre building following the reconstruction. A gallery, creative laboratory, studio stage and rooms for workshops were created here.

A path through a maze leads to the Drak Laboratory, an original multimedia playroom with modern simulators that let visitors young and old try out the various theatre professions. The exhibit hall on the second floor of Labyrint offers short-term exhibits.

As part of the Labyrint – Paradise of Theatre and Education project, various types of interactive educational programs and workshops, mainly intended for school groups, are held in the Labyrint spaces. Through hands-on experience, children can get to know the theatrical arts from many
different perspectives. They direct them towards a positive relationship to the theatre, active viewing and their own creative activities, which should contribute to their personal social development. The project also includes year-round theatre activities of children&#39;s and youth’s theatre troupes under the name LAB and accredited seminars for teachers.

However, theatre performances, concerts, workshops and international residences of professional and amateur artists are also regularly held in the Labyrint spaces.

The reconstruction of the historically valuable building of the Theresian barracks, which represented an investment of more than forty million crowns, was made possible by the city of Hradec Králové, which is also the founder of the Drak Theatre. Period of reconstruction: 2008 – 2010. The reconstruction was performed by STAKO s.r.o., while the interior designer is Ing. arch. Jan Zákostelecký.

On weekdays for organised groups upon prior agreement by phone at +420 734 655 157 or by e-mail at obchodni@draktheatre.cz.

You can enter the exhibitons without having to proove your infectivity, however the visitors need to:

– wear a respirator FFP2 or nano face mask,
– keep a distance of at least 1.5 metres from each other,
– desinfect their hands.