A mechanized performance by Magali Rousseau.

In I am stirring air, Magali Rousseau stages herself with poetic mechanisms sheʼs created over the past decade. A long, instinctive journey to finally understand that all these steel beings are part of the same story. Her own story.

She says simple, personal, intimate words. Some sentences that are seemingly extracts of childhood. We stroll with her in a chiaroscuro timeless space, populated by machines that alternately enter the light and come alive. They all unfold bright inventiveness in attempts to fly off that we know will fail. Itʼs as if she invites us in her studio, where the wheels are exposed and the emotion of the first fruits still palpable.

The mechanisms that we discover are delicate, intelligent, poetic, solitary, touching. They inhabit a particular area of our imagination, fed by our hopes and fears. Everyone can see an aspect of themselves.

“I go in search of micro-disturbances. Subtle movements, regular and chaotic of fragile organisms. This is my theater of illusion. Pathetic machines, funny, sad, sweet, aggressive, determined, helpless. They flee, dragging their feet; try to fly but do not succeed. They stir the air, try climbing high, but all collapse. They tirelessly repeat the same gestures, trying in their own way to tell us their story. They call to our sensitivity to beings and things, to our ability to feel, to play, to understand.“ 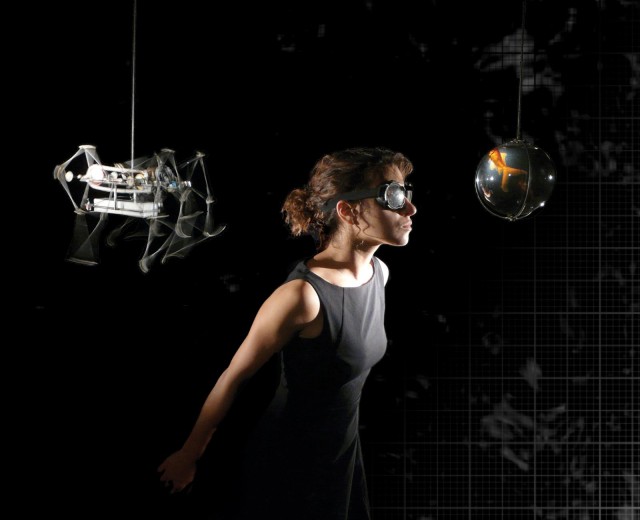 After a year of incubation under the wing of Les Anges au Plafond Company, L’Insolite Mécanique Company was founded in 2015 as a creative space halfway between mechanized theater, plastic installation and performance. Magali Rousseau creates and manipulates her poetic objects. 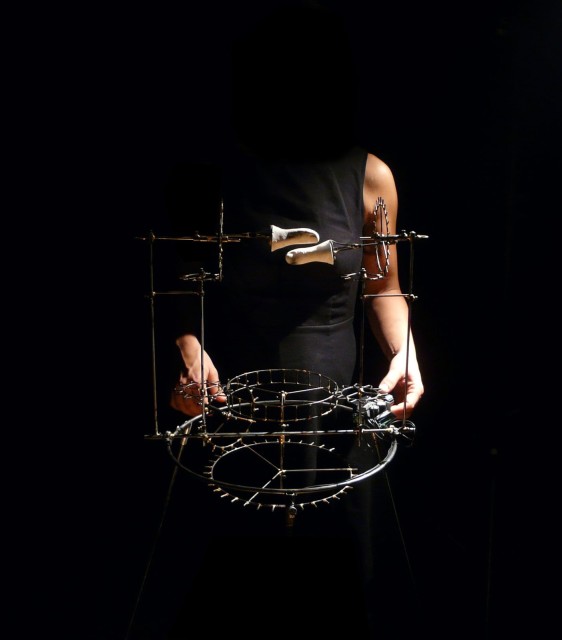 Now a builder and manipulator of mechanical and poetic objects, Magali Rousseau studied at the School of Decorative Arts in Strasbourg. She there trained herself in the metal, wood, and jewelry workshops and won the Voecklin Awards and honors in 2008.

In her studio, she gives life to her objects with cranks and motors, but also develops systems that operate by fire, water, air, flow of material. She creates scenography and mechanisms for theatre companies. She participated in all the creations of the company Les Anges au Plafond for 10 years. She also worked with La Machine in Nantes, Antigua y Barbuda in Barcelona, and Mal Pelo in Girona. I am stirring air was born from her desire to take all her machines on stage to show us what they are capable of!